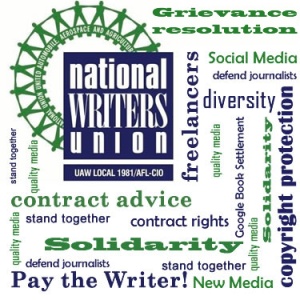 Originally, I planned to begin this post about the National Writers Union’s new website by saying that, though I have been an NWU member since 2001, I continue to pay my dues out of union solidarity and because I want to be a part of the labor movement. In truth my freelance work involves only occasional writing jobs, and a lot of the writing I do is for my own blogs. As a result I don’t think I’m as much of a “professional” writer as some of my fellow union members are.

But when I described my proposed opening to my partner Greg, who is also an NWU member, he said it was rather a weak and idealistic explanation for why I stay in the NWU. So I asked him why he keeps paying his dues each year, and he said, “Because I’m not a fool. I think that everybody who knows what’s what also knows that it’s important to be part of an organization that advocates for your profession/ trade/ line of work, and freelance writers are no exception. I would certainly also argue that being part of a trade union allows you to be part of a larger struggle, and there’s strength in numbers. But I’m trying to be practical here and not just idealistic.”

I liked his answer, and I agree with it. I guess I justify my union membership the way I do because I sometimes feel a little underwhelmed by my own writerly resume. Other writers in the NWU have many published books to their credit (as does Greg) or have had their freelance work appear in lots of major publications that pay in dollars per word. As for me, most of what I’ve had published is short, literary fiction that only occasionally pays anything, and then it’s usually an honorarium. So I identify myself within the union as being a part of the Biz Tech division, which incorporates business and technical writers, as well as “all other writers who are not book authors or journalists.”

In any case, I decided to write a piece about the NWU because a few days ago (July 13) they rolled out their new website, which has been in the works since the 2013 Delegate Assembly. There’s much to like about the new site, including a “Hire a Writer” page that will allow you to search the union’s “talent database” to find a union writer appropriate to the job you have in mind. Or, if you are an NWU member, you can add your profile to the database and possibly pick up a freelance job through the new site.

But what I liked even better about the site is that it contains some real messages of solidarity, encouraging writers of all types and skill levels to join and giving them good reasons to do so. Part of the answer given to the question “Who Can Join?” which is given a prominent place on the home page is the following: “The National Writers Union (NWU) represents all types of writers working in print, electronic, and multimedia formats… As writers’ work moves online, we will continue to support all writers. All are valuable economic participants whose labor as creators is the driving force behind the new age of digital content.”

OK, I thought, that sounds very welcoming and inclusive. Then I went to the Frequently Asked Questions page and looked at the answer given to the question of why a well-published and experienced writer should join the union when it’s “open to both professionals and writers just breaking into the field.” Because, says the reply, “[i]n our experience, more established writers aren’t treated less well when less experienced writers demand better treatment. We all gain.”

And finally, in answer to the question of why a writer who writes for pleasure and considers herself to be an artist, not a worker, should join the union: “Yes, some of us write for pleasure and don’t depend on writing income to support ourselves. Yet our writing has value: since publishing is a profitable business, we deserve to be treated with respect and consistency and to receive a fair share of the proceeds. We all need to ask for what we deserve so that we don’t become a society where only the wealthy can afford to write.”

If I had to make one criticism of the new NWU website, I would say I was disappointed that it’s not a whole lot more vibrant-looking and colorful than its predecessor. So many members asked for more of an eye-catching design that I was surprised to see the same old limited palette of blues, greens and greys and a continued lack of photos and graphics. But the message of solidarity and the reminder about “strength in numbers” lets me know that I’m making the right decision when I pay my dues and continue to be a member of the National Writers Union.

View all posts by digitalgloss

This site uses Akismet to reduce spam. Learn how your comment data is processed.